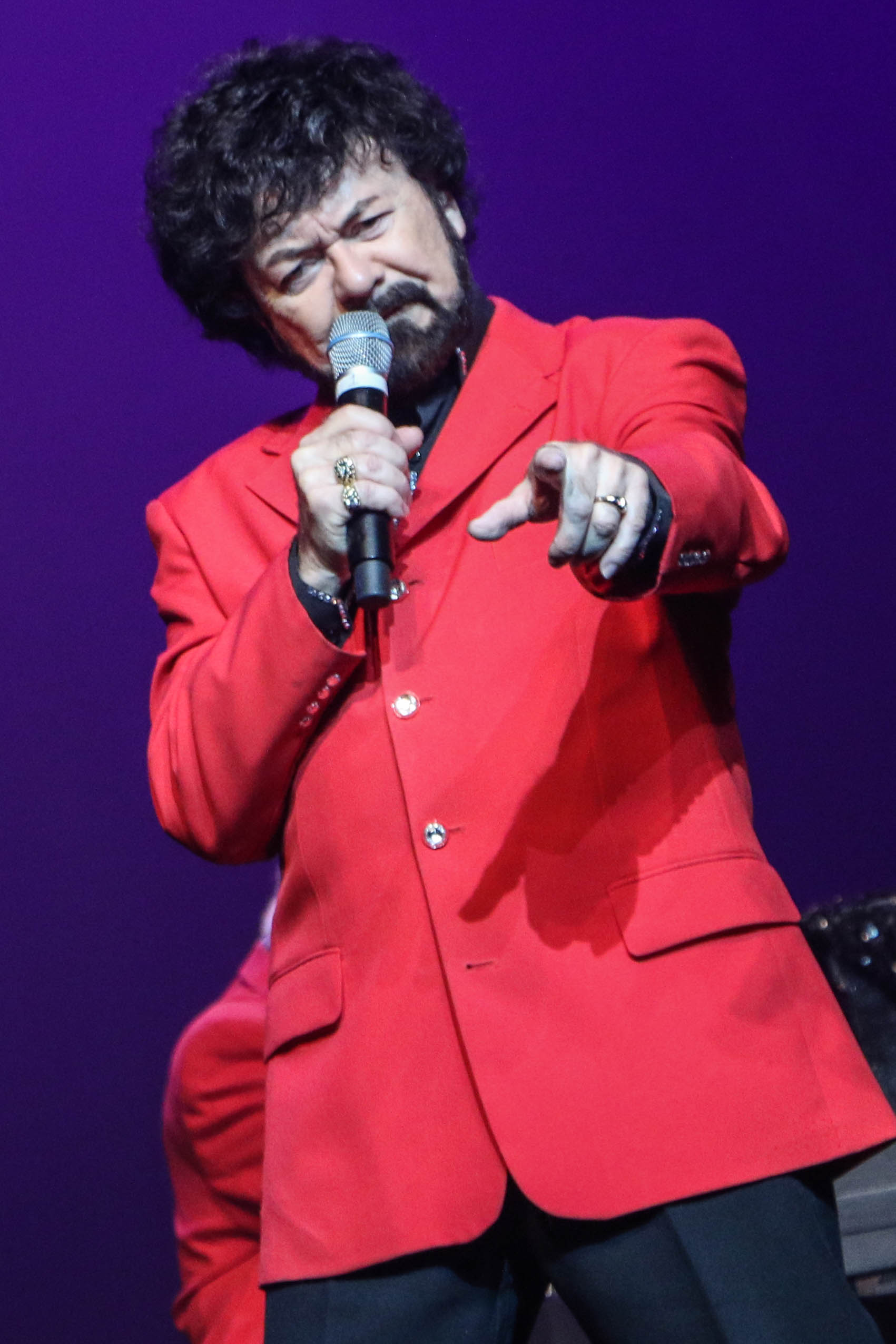 He found out just how true that was at the age of 10 while sitting in the backseat of the car on a family outing when he began to sing. Upon hearing his son’s beautiful voice, his father, RW Sr, stopped the car, turned around to the child and said to him “You’ll be singing at the next Blackwood Brothers concert.” And he did several times.

It was only a year later his father was killed in a tragic plane crash and young RW lost his hero.

A couple of months after the Blackwood Brothers horrific plane crash, James Blackwood re-created the group with Winston’s uncle Cecil Blackwood and JD Sumner and he called upon 11 year old Winston to sing his father songs at all of the Blackwood Brothers concert for that summer and several summers to come. By this time he was becoming known as RW Jr to audiences across America. In fact one of those concerts in De Leon Texas, the Blackwood Brothers were singing a concert with none other than Elvis Presley. After hearing young RW sing his father’s songs, Elvis went to him and said “I’m going to sing only gospel songs tonight in honor of your father who was my hero!”

By the time his later teenage years began he no longer traveled with the famous group but he did sing at special functions all around Memphis such as weddings, church events, private parties and even on the Billy Graham Crusade. He also appeared on television great hit in the 50’s, The Ted Mack Amateur Hour four times and won the show all four times.

And his sophomore year of college at Memphis State University, RW decided to move to Nashville and take a shot at a country music career, once again changing his name to Bobby Winston. Living at the YMCA and selling ladies shoes at a large department store in downtown Nashville, at nights he would hit the studios with friends trying to get a shot at a singing career. Because of his last name it gave him a great identity and he met a lot of stars in the studios even sang a song with the great Floyd Cramer.

A year later his Uncle James called him again and asked him to move back to Memphis to sing with a new young quartet that he was putting together. It would consist of the sons of the Blackwood Brothers including RW, his brother Ron, James’s son Jimmy, Bill Lyles Jr whose father had been the bass singer for the Blackwood brothers who was also killed in the plane crash in 1954, and a young man on keyboards… Everett Reece.

RW immediately left Nashville and returned to begin traveling in singing the lead for the Jr Blackwood Brothers. A few changes were made in the group as the great became more popular and some of the boys found it difficult to travel so much. Phil Enloe became the bass singer and Dean Brown replaced the tenor and the quartet changed their name to the Blackwood Boys.

It wasn’t long before the Blackwood boys perform at the music call in Houston Texas and RW met the girl who would become his wife a year later, Donna Drew.

Once again a few members changed and the group decided to move to Charlotte North Carolina and become the New Harvesters to work under the tutelage of Bill Hefner where they would be appearing on Bill’s daily television show.
Being that far away from the family didn’t last long and they soon moved back to Memphis and once again became the Blackwood Boys.

In 1967, late on a Saturday night the tenor singer couldn’t make a Sunday morningconcert so RW woke his wife Donna and asked if she would sing tenor for the church service the next morning. She replied, “Yes, but I won’t be at Blackwood Brother or a Blackwood Boy. ” So the Blackwood Singers were born.

With RW at the helm and Ron handling the booking, The Blackwood Singers begin to receive national prominence and traveled all over the US and Canada.

Recording on Heartwarming’s Impact label, The Blackwood singers had several hits in gospel music with RW as the lead singer. In 1976 a new recording contract with Capitol Records came into fruition and the group would become RW Blackwood and The Blackwood Singers and with that RW had six songs that made the top 100 Billboard chart as well as Cash Box country music charts. The group won several accolades and RW won Cashbox’s Country Artist Award.

Working with many country music greats in the 60s and 70s established the group as a musical force but RW’s heart had always been with the Blackwood Brothers and once again in 1979, answering the call from his Uncle James, RW moved his family back to Memphis and joined the Blackwood Brothersorganization.

While there he had his own solo ministry and also sang lead for the group while his wife Donna worked as a hairdresser and their two children, Andrea and Robbie were in school.

RW got a phone call in 1991 asking him to reform The Blackwood Singers and move to Branson Missouri to perform at Shepherd of the Hills and Campbell’s Ozark country Jubilee. Daughter Andrea was married and had started a family by this time and couldn’t move but son Robbie, a great drummer who had just finished high school, moved with mom and dad. About a year later Andrea and her husband Todd and three children moved to Springfield Missouri which is only a short distance from Branson and she once again joined her parents to sing with them.

At the wedding reception of Robbie and his new wife Mary, Cecil Blackwood talked with RW and Donna about RW once again singing lead for the Blackwood Brothers and helping to run his quartet because of Cecil’s illness… throat cancer. RW felt he needed to help his uncle Cecil in this time of need so he left a few weeks later and begin to travel with Cecil. It was only a few short months later that Cecil passed on to glory and RW joined his family in Branson again.

The year 2000, RW had an offer from his brother Ron to move to Pigeon Forge and join him and his wife at the Louise Mandrell Theater to perform each morning. Working with Louise for two years was wonderful but Fee Hedrick Entertainment Group approached the two brothers and offered a better deal at their theater to which the brothers accepted.

The Blackwood Morning Show was successful and had a good following in Pigeon Forge Tennessee but Donna’s heart was back in Branson Missouri with her children and their spouses and 11 grandchildren.
While in Pigeon Forge, RW was awarded the prestigious Music City Gospel “Living Legend Award” and Donna won Gospel Music’s Diamond Award.

15 years after moving to Pigeon Forge, God opened the door for RW and Donna to move back to Branson Missouri to be with their expanded family and continue to perform in theaters with his talented family.

Their first year back in Branson reunited them with former group members, that they quickly hired, and friends they had left behind so many years before. The group also won The Branson Terry Award for Gospel Group of the Year.

And on a special announcement recently, RW commented, “We’re excited about 2017 because we’ll be working with the Duttons, a family so much like ours…same family values and talent!”

Thank you Branson Show Awards forComing out!! We had a fabulous time with YOU!!The Blackwoods ... See MoreSee Less
View on Facebook
· Share

The Blackwoods ShowSHOWTIME 10:00 am TODAY Americana TheatreBRANSON MOThe Blackwoods are known throughout gospel music circles for their pure family harmony, excellent musicianship, and first class entertainment. With an 80 year track record of hits, The Blackwoods bring hand-clapping, high energy entertainment to the stage. To quote a recent fan, “The show is American, family, loyalty and excellence all rolled into two hours that will leave you spellbound!”The show is a stroll down memory lane with history and video of the original Blackwood Brothers and the Blackwood Singers and the songs that made them a household name. A rousing veteran’s tribute is always a part of the show as is that feeling of family that audience members experience this great performance.A new addition to the show this year is a younger generation of Blackwoods who will be performing throughout the fall & Christmas months and of course the Blackwoods end their performance with a fabulous tribute to our country in their patriotic finale! This high energy show will captivate every audience!To Reserve Your Blackwoods Show Tickets Call 417-294-3664 or Order Online at www.etix.com/ticket/p/8602524/the-blackwoods-show-branson-americana-theatre ... See MoreSee Less

From our hearts to yours ♥️ ... See MoreSee Less