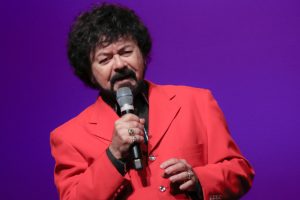 He found out just how true that was at the age of 10 while sitting in the backseat of the car on a family outing when he began to sing. Upon hearing his son’s beautiful voice, his father, RW Sr, stopped the car, turned around to the child and said to him “You’ll be singing at the next Blackwood Brothers concert.” And he did several times.  Read More 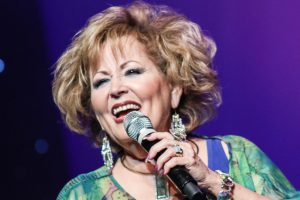 The original Gaudy Granny, Donna Blackwood, likes to say she is one-half of the dynamic duo, the other half being her husband, RW Blackwood of 52 years in April of 2017. Donna was raised in Houston, Texas by her parents and had one brother but her family realized that at an early age she had a talent for singing. At the age of 3, her grandmother stood her on a piano stool in the adult Sunday School class and had her sing. Donna’s mother wanted her to be able to play the piano like her gifted grandmother but unfortunately Piano was not Donna’s gift but singing was.  Read More 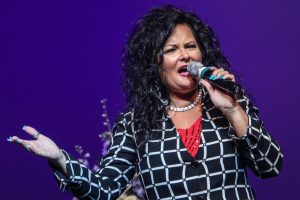 Andrea is the daughter of RW and Donna Blackwood. Born 1965 in Memphis, Tn. She has one sibling, a brother, Robert Winston III, aka Robbie, who is 8 years younger. Being born in a singing family, naturally singing became her gift and passion as well. She traveled with her parents as a young child all over the United States, met many celebrities, and entertained in just about every major amusement park and state fair in the country. Home base was Nashville, Tn for quite a few years until 1979 when her family moved to Memphis where the rest of the Blackwood family lived. Andrea was a freshman in high school at that time and her mom, Donna started staying home at that point as well.  Read More

MICHAEL JASON FROST was born and raised in a small town in East Tennessee. The son of a preacher, he grew up singing gospel music. Before he was a teenager, Michael was harmonizing with his cousins and traveling to sing at churches across the region. Shortly after the unexpected passing of his Dad, who was a pastor and a mentor to so many people in that small town, Michael picked up the torch to carry the gospel by developing his songwriting skills. As a songwriter, Michael has had cuts by several of gospel music’s most popular artists, including The Hyssongs, The Dixie Melody Boys, The McKameys, Ivan Parker, Hissong, Heirline, The Wilburns, and many more. One of his best known songs is “That’s God,” a Singing News Top Ten hit in 2004. In 2006,  Read More

Nominations for Branson Show Awards were announced late last night. Thank you Michael Wackerly, Dewaine Jeske, Jim Kast and the entire committee for considering us! We are truly grateful. The Branson Show Awards take place August 29, 2 p.m. at God and Country Theatre. Call 417-334-6806 for tickets, or visit bransonshowawards.comWe are very thankful for all the nominations we’ve received this year, including those from the Branson Terry Music Awards (which will take place Sept. 26, 6 pm, Branson Famous Baldknobbers Theatre. Get tickets at allaccessbranson.com)… and also nominations from The Best Of Branson, an online vote, with winners to be announced in October (vote daily at votebestofbranson.com)We count it a great blessing to be a small part of the Branson entertainment community, and we’re so thankful to be able to do work that we love. Congratulations to every nominee!Jennifer Gilbert Frost #bransonmo #bransonshows #TheFrosts #michaeljasonfrost #bransonshowawards #bransonterrymusicawards #votebestofbranson Raiding the Country Vault The Blackwoods C.J. Newsom's Classic Country & Comedy Back to the Bee Gees 1 Hits of the 60's at The Clay Cooper Theatre Americana Theatre ... See MoreSee Less

I wanted to take a moment to start posting about what I’m going to call my #swingingsummer! This summer, I’m getting the opportunity to swing at numerous shows in Branson and am so excited about each project! My first fill in was actually very last minute but I was so thankful and thrilled about it! I got to perform with the legendary Blackwoods here at the Americana! Thank you to RW and Donna Blackwood for this awesome opportunity! Stay tuned to hear about the other shows I’m excited to be swinging in for later on this summer! ... See MoreSee Less

What a wonderful surprise engagement we had this morning.  ... See MoreSee Less

CONGRATULATIONS to Mark Kingsbury and Paige Lee! Mark proposed to her just moments ago during our show (and today is also her birthday) MD Kingsbury ... See MoreSee Less