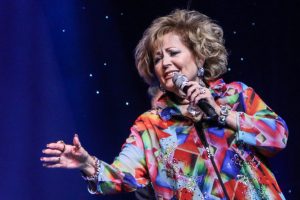 Donna Blackwood likes to say she is one-half of the dynamic duo, the other half being her husband, RW Blackwood of 52 years in April of 2017.

Donna was raised in Houston, Texas by her parents and had one brother but her family realized that at an early age she had a talent for singing. At the age of 3, her grandmother stood her on a piano stool in the adult Sunday School class and had her sing. Donna’s mother wanted her to be able to play the piano like her gifted grandmother but unfortunately Piano was not Donna’s gift but singing was. So after several years of piano Donna begin taking voice at the Houston Conservatory of Music as well as singing in the choir at school and church. Because her father was a pastor, she sang numerous solos, duets, trios, & quartets at churches all over the Houston area and at the age of 16 sang with the James Robison Crusades.

She won solo competitions through her teen years but at the age of 17 she was swept off of her feet by a young man who was traveling and singing with his cousins in a quartet at the Houston Music Hall, RW Blackwood, Jr. A little over a year later they became husband and wife.

After two years of marriage RW needed a tenor singer for his group and remembering that his mother-in-law had said Donna could sing, he asked her to fill in until he could hire someone. Thus
The Blackwood Singers formed in 1967 where Donna joined her husband traveling and singing all over America.

Donna has recorded on the Benson Heartwarming Impact label and has had several songs in the Gospel Charts through the years: “Through It All”, “He Was There All The Time”, “I Find No Fault in Him” “Put Your Hand in the Hand”, and several others as part of the Blackwood Singers group.

In the 1976, the group moved to Nashville where her husband signed the group to the Capitol recording label and had six Billboard Country Top 100 Charted Songs.

In 1990, the couple moved to Branson, Missouri and reformed the Blackwood Singers, with their children who were now adults, and performed at the Campbell’s Ozark Country Jubilee and Shepherd of the Hills.

In the year 2000, RW and Donna moved to Pigeon Forge, Tennessee to join RW’s brother, Ron, and sing at the Louise Mandrell Theater. RW’s brother and his wife retired to Texas but Donna and RW remained in Pigeon Forge where they performed their Blackwood Morning Show at the Smoky Mountain Opry Theater owned by Fee Hedrick Family Entertainment Group.

In January of 2012, Donna was diagnosed with inoperable Colon Rectal Cancer and began chemo and radiation the day before her 65th birthday. Trying to perform everyday even if she could only sing one song, Donna continued her treatments until it became impossible and the doctors had told her “if she lived she would be in a wheelchair for the rest of her life wearing a colostomy”! Crying out to God the Scriptures she had posted all over her house, healing began and by late December the doctors declared her healed. It’s a story Donna shares everyday that will give someone hope.

Donna and her husband R W have once again made their home in Branson Missouri where you can see them performing at the Dutton Theater.

Donna shares her testimony of healing everyday at the theater and knows that God healed her to tell her story, to give people hope, to let them know that Christ is the same yesterday, today, and forever.

Be sure to check out Donna’s Corner!

We Honor those who made such a   sacrifice for their country . ... See MoreSee Less

Ike Hall left his hometown of Walnut Grove, Missouri to become a member of the Blackwood Boys in late 1965. In December of 1966 I ke put his music career on hold and volunteered for Vietnam at the age of 18 years old. The Blackwood Boys had been planning for Ike’s return to re-join our group but with 20 days left of his tour in Vietnam, Ike volunteered to carry medical supplies to the front lines. His jeep struck a land mine, and Ike was killed at the young age of 20 years old. Ike made the ultimate sacrifice we honor him on Memorial Day weekend.   ... See MoreSee Less