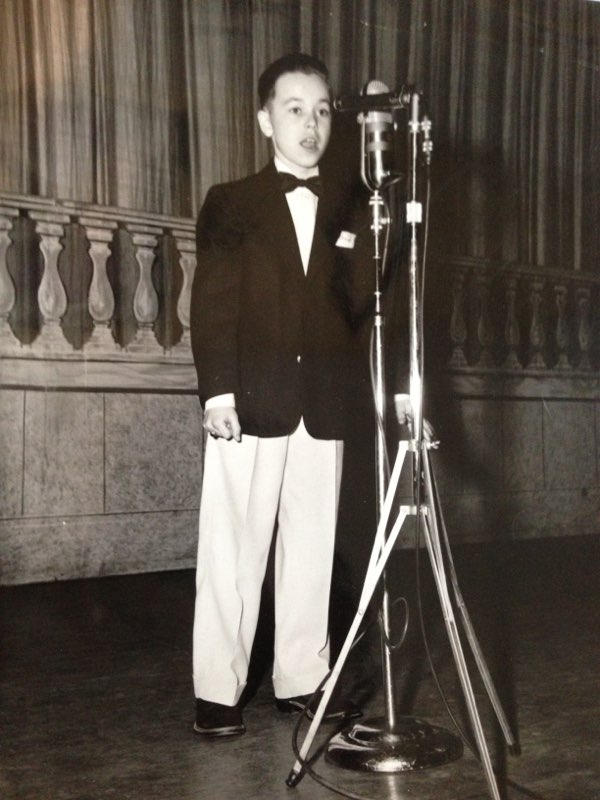 Family harmony, excellence in musicianship, first class entertainment and dedication to their talent would be The Blackwoods. With a heritage of over 80 years, The Blackwood Family have been pioneers in the world of Gospel Music and have set high standards.
In truth, gospel and country music for the Blackwood lineage can be dated back to 1899 when the Blackwood String, consisting of 1 sister and 7 brothers, played their mandolins, fiddles, and guitars in local gatherings around their home in Mississippi.
With music born in his veins, 12 year old RW Blackwood, Jr., appeared on stage with the Blackwood Brothers for their Memorial Concert in honor of RW Blackwood Sr. and Bill Lyles who were killed in a tragic airplane accident at a concert in Clanton Alabama in 1954.

And so began the musical career of RW Blackwood, Jr. He appeared on Ted Mack amateur Hour Television show on four different occasions and won the show all four times. Billy Graham also had young RW sing at one of his crusade meetings.

After graduating high school and attending college for a couple of years, twenty year old, RW went to Nashville to follow his dream of a musical career. It wasn’t long before his uncle, James Blackwood, called and asked RW to join his son, Jimmy, Bill Lyles, Jr and two other young men to make up the group called The Jr. Blackwood Brothers who later became known as The Blackwood Boys. 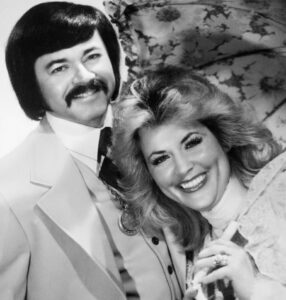 The Blackwood Boys were traveling all over the country just as their fathers had before them. In Houston Texas, RW met a young lady, Donna, and in 1965 made her his wife.

In 1966 the tenor singer had to leave the all-male group unexpectedly leaving his position vacant. The group was to sing the following morning at a church in Houston Texas,…RW’s in-laws church! RW asked his wife Donna if she could sing the tenor part with the group the next morning to which she replied, “of course!” Thus the Blackwood Singers were born because Donna refused to be a Blackwood Brother or a Blackwood Boy!

RW’s brother, Ron, and his wife joined the group and this singing group of young people became a entity in the new world of contemporary Christian music. They quickly had what was referred to as crossover country hits like “Put Your Hand in the Hand”, “Stop and Smell the Roses”, “Everything is Beautiful”, “Let Me Be There” and many others. 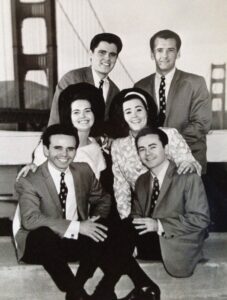 The Blackwood Singers had many songs in the gospel music charts which won them the 1971 Dove award and kept them in great demand in the gospel and country music fields.

Hearing about the Blackwood Singers, Dale Robertson of the television show Wells Fargo contacted the group to appear with him on his concert dates and then the ultimate call came: ROY ROGERS AND DALE EVANS!

Roy and Dale needed the Blackwood singers to travel and sing with them on concert dates as the Sons of the Pioneers were unavailable. 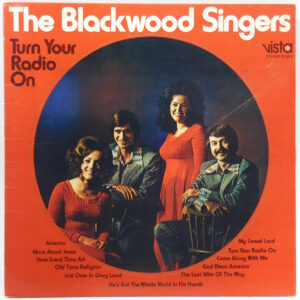 The Blackwood Singers were on their way. Capital Records signed them to a recording contract. The Country Music industry’s top charting magazines: Billboard, Cashbox, and Record World charted five of their songs in Country Music’s Top 100. Articles were written about the group and their success in country and gospel music magazines and newspapers all over the country. Songs they recorded that charted in the Gospel Music field:

“I Find No Fault No Fault in Him”, “Turn Your Radio On”, and their biggest gospel hit, “Through It All”.

The Blackwood Singers were booked at music venues from Harrah’s Club in Lake Tahoe Nevada, to the Corn Palace in South Dakota to the MGM Grand in Las Vegas, to the Palomino Club of Los Angeles…just to name a few.

State and county fairs all over the US were hiring the group including Florida’s Strawberry Festival , the Texas State Fair, Dade County Youth Fair, New York State Fair, and they were the first country or gospel groups to appear a the Hawaii State Fair in Honolulu. While in Hawaii the sang at all of the military bases in the state. 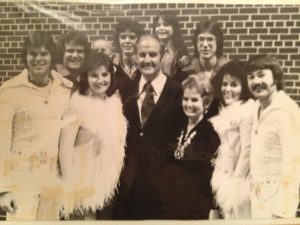 The national political world wanted the Blackwood Singers for appearances because of their patriotism in their shows. They sang with Governors, Senators, Representatives from both the Republican an Democratic parties and one former presidential candidate who was once again running for Senator… George McGovern.

The Blackwood Singers were working day and night from one end of the US to the other and even in the provinces of Canada, The Virgin Islands, Puerto Rico, and The Bahamas.

In 1979 RW’s Uncle Cecil called and asked him to leave Nashville and move to Memphis and join the Blackwood Brothers. Because RW’s dream had always been to be a member of the group that his father, grandfather, and uncles had started, his answer was, “I’m coming.”

Giving up a prestigious career, RW, Donna, and their two children, Andrea and Robbie packed up and moved to Memphis in 1980. RW sang with the Blackwood Brothers for several years and also had his own successful solo ministry.

In 1990 RW, Donna, daughter Andrea and son Robbie reestablished the Blackwood Singers in Branson Missouri singing at Campbells Ozark Country Jubilee and Shepherd of the Hills. Rather than traveling thousands of miles each year to sing and share their talent, The Blackwood Singers were able to stay in one place while fans came to see them. 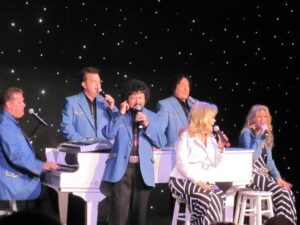 The year 2000 brought another change for RW and Donna. RW’s brother called and asked for them to join him in Pigeon Forge Tennessee, at the Louise Mandrell Theater performing their own morning show. By this time, both Andrea and Robbie were married and had started their families in Branson and didn’t want to move. RW and Donna felt like Pigeon Forge was where they needed to be. Leaving their family, RW and Donna moved back to Tennessee where they had a wonderful morning show with the Fee Hedrick Family Entertainment Group for the next fifteen years.

With a growing family back in the Branson area, Donna wanted to get back and enjoy her eleven grandchildren, three of whom were now married. While visiting the family in Branson in January of 2015 a theater called RW and asked that he and Donna come talk with them. The success of the Blackwood Morning Show in Pigeon Forge had reached the ears of the theater and the owner and GM were interested in bringing the show back to Branson.

Not wasting any time, RW and Donna moved back to Branson Missouri on January 1 of 2016 and revived The Blackwoods show with their daughter Andrea, former bass singer, Denny Yeary, tenor singer Jonathan Lee who had sung with them in Pigeon Forge for seven years, and baritone Michael Frost who was also a great singer/songwriter they had known in Pigeon Forge.

The Blackwood Singers possess something that very few musical groups ever achieve in their entire careers and that is not just success, but a sincere love for people and making them happy. They have achieved unbelievable heights in the world of music and entertainment. They are exciting, musical, dynamic, personable and all of this with a touch of class in their performance and have won many accolade in the music world, most recently winning Branson’s Terry Awards, “Gospel Group of the Year”.

As Joe Bonsall of the Oak Ridge Boys said, “The Blackwood Singers are keeping the NAME and LEGACY alive.” 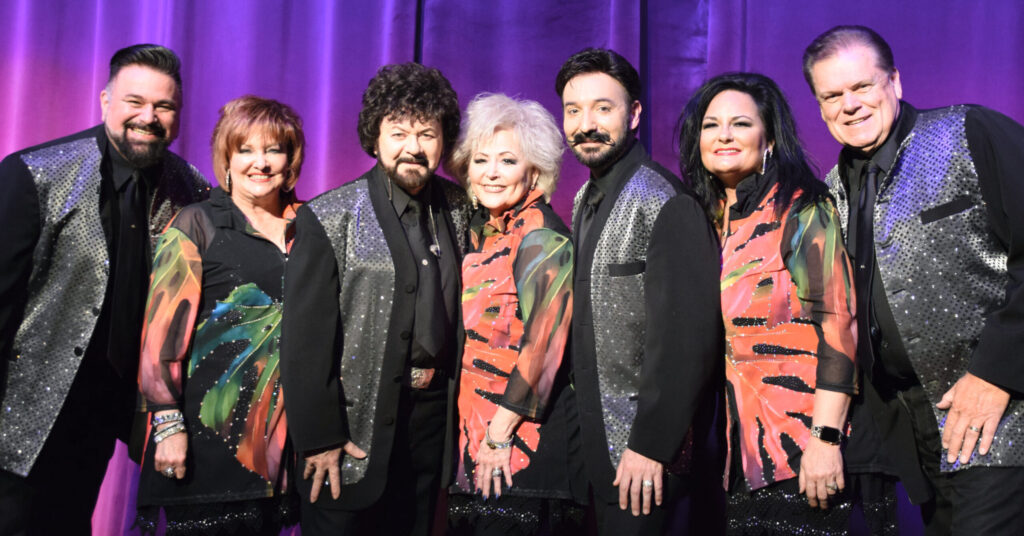 Remembering Jerry Kirksey Jerry Kirksey, Editor Emeritus of Singing News Magazine, passed away today at the age of 82. Mr. Kirksey had been in declining health for several years.Born in Panama City, Florida, on June 13, 1940, Jerry and his family returned to his parents’ hometown of Pensacola following World War II. It was during his junior year of high school that Jerry first began working in one of his greatest passions, radio. After his graduation as a part of the Class of 1958, Jerry moved back to Panama City to begin work with WTHR Radio.A return to Pensacola in March of 1960 set Jerry on the path that would ultimately defining his professional career. Jerry began working with The Florida Boys, as the quartet’s promotional director and office manager. This led to a working relationship with J.G. Whitfield. Jerry would work closely with Mr. Whitfield as the Southern Gospel music icon promoted concerts across the nation, and eventually launch what went on to become the largest and oldest Southern Gospel music publication, Singing News Magazine. Jerry served with Singing News Magazine from May 1969 until his retirement in 2010, encompassing a total of 492 issues. During his time at the magazine, Jerry created Southern Gospel music’s first National Radio Airplay Chart (1970) and the Singing News Fan Awards (1971).In addition to his work with Singing News, Jerry served on the board of directors of the original Gospel Music Association, and the board of the original Southern Gospel Music Association of Georgia. He was involved in organizing the Southern Gospel Music Guild and the modern-day Southern Gospel Music Association. He was actively involved in the building and development of the original SGMA Hall of Fame and Museum at Dollywood. Jerry was inducted into the SGMA Hall of Fame in 2011.Jerry married Carolyn Sue Rhodes on October 1, 1967. Sons Kenneth and Brett would eventually work with Jerry at Singing News, especially after the family moved to Boone, North Carolina, in 1987 following the sale of the publication to North Carolina businessman Maurice Templeton. Likewise, Carolyn was a fixture at many Southern Gospel concerts as she and Jerry represented Singing News across the nation. Carolyn passed away in July of 2015.Funeral arrangements are pending at this time. A complete tribute to Jerry will be found in the March 2023 issue of Singing News. ... See MoreSee Less

We will be at God And Country Theater with Jerry Presley this year 2023 ... See MoreSee Less

The Blackwoods of Branson extend condolences to the family of Lisa Marie Presley. Our prayers are for their peace and comfort during this time of difficulty and broken hearts. To Priscilla and Lisa Marie’s 3 daughters, may you be surrounded by God’s presence and His love!In deepest sympathy,RW and Donna Blackwood ... See MoreSee Less
View on Facebook
· Share