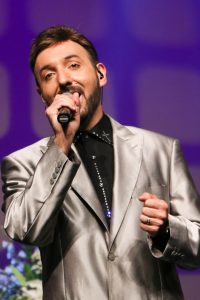 MICHAEL FROST – BARITONE SINGER
Michael Jason Frost was born and raised in a small town in East Tennessee. The son of a preacher, he grew up singing gospel music. Before he was a teenager, Michael was harmonizing with his cousins and traveling to sing at churches across the region. Shortly after the unexpected passing of his Dad, who was a pastor and a mentor to so many people in that small town, Michael picked up the torch to carry the gospel by developing his songwriting skills. As a songwriter, Michael has had cuts by several of gospel music’s most popular artists, including The Hyssongs, The Dixie Melody Boys, The McKameys, Ivan Parker, Hissong, Heirline, The Wilburns, and many more. One of his best known songs is “That’s God,” a Singing News Top Ten hit in 2004. In 2006, Michael was cast in “The Miracle” at The Miracle Theater in Pigeon Forge, TN. “The Miracle” was an original musical production about the life of Christ. Michael signed on for every season of the show, and he played various roles from John the Baptist to Judas, and also as an understudy to the role of Jesus. There, he met his future wife, Jen, who was also performing in the show. The couple held their wedding ceremony at The Miracle Theater, with R.W. and Donna Blackwood as their special guest singers. The Frosts went on to form “The Michael Frost Trio,” singing at gospel music events all across the country and releasing several songs to radio. Michael and Jen now live in Branson, MO, along with their daughter, Jael. Michael joined the Blackwood Singers in 2016.

Great things are happening at The Blackwood’s show! On December 2nd and December 16th we have a guest choir performing with us during our Christmas portion of the show! Get your tickets now! 🎫🎫🎫🎫Also the Blackwood’s are performing at the James River Christmas event Saturday December 4th at 5 pm & 7 pm, and Sunday December 5th at 9 am & 10:45 am at the West Campus location of James River Church! Make plans to attend!!! ... See MoreSee Less
View on Facebook
· Share