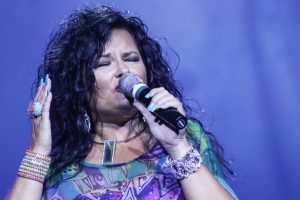 Andrea is the daughter of RW and Donna Blackwood. Born 1965 in Memphis, Tn. She has one sibling, a brother, Robert Winston III, aka Robbie, who is 8 years younger.

Being born in a singing family, naturally singing became her gift and passion as well. She traveled with her parents as a young child all over the United States, met many celebrities, and entertained in just about every major amusement park and state fair in the country.

Home base was Nashville, Tn for quite a few years until 1979 when her family moved to Memphis where the rest of the Blackwood family lived. Andrea was a freshman in high school at that time and her mom, Donna started staying home at that point as well.

Andrea began singing in high school choirs and youth choirs at church, and competing in vocal competitions. But basically integrated into a normal way of life as a high school student and cheerleader.

After graduating in 1983 she attended Evangel University in the fall semester for a short stint but soon resumed her passion of singing and traveling with her family again for a couple of years.

At various times while not out traveling, Andrea and two very talented friends formed a local “backup” singing group called The Blackwood Connection. Their only purpose was to sing studio vocals in the Memphis area. They were very busy with this endeavor, mostly with local entertainment but two important experiences that came for them was recording background vocals on 5 songs on Al Green’s album entitled “Trust In God” recorded in 1984 and then singing background vocals with Jimmy Jamison on several projects. (Jimmy Jamison would later be the lead vocalist for the secular group Survivor, “Eye of the Tiger”). Andrea was performed a United Way jingle with David Jones of The Monkeys, in the middle 80’s.

In May of 1989 she began dating her soul mate, Todd Carter, whom she had ironically enough met briefly during her short time at Evangel. He had graduated college and moved to Memphis to take a position at Federal Express and also attended the same church, First Assembly of God/Memphis, which is how they renewed their friendship. Later that same year in September they were engaged and married in December. Andrea stopped traveling to focus on being a wife and mom and the couple had 2 sons and one daughter while living in Memphis.

In the meantime Andrea’s parents and brother had moved to Branson, Mo in 1991 to begin entertaining in a theatre, where fans and tourists would travel to hear and see them perform. Their traveling days would finally come to a halt.

In the year 1993 Todd and Andrea moved to Ozark, Mo as Todd took a different opportunity and position with FedEx of Springfield, Mo., and significantly enough was only 35 miles from Branson. Andrea began singing again with her parents and other group members to form a daily show of entertainment in the Branson theatre arena. It was very successful for many years. During this time Todd and Andrea had two more girls to add to their clan.

Also her brother, Robbie, was a rising musician as a drummer in town and has since become the best of the best as a phenomenal drummer, sought out by many. Might I add he married in 2000 and has 6 children!

In 2000 her parents, RW and Donna, moved again, this time to Pigeon Forge, Tn to perform in a theatre there. They would remain there the next 15 years.

This prompted Andrea to again focus on her family and be a stay at home mom. She was heavily involved in her kids school and sporting events as well as a soloist and choir member of her church, James River Assembly. She and Todd birthed a marriage ministry as well, Marriages by Design, which has grown over the years to touch many lives through counseling, classes, speaking engagements, and/or retreats.

Andrea would visit and fill in at her parents show in Pigeon Forge, Tn when needed but that fed her passion to once again sing with her family regularly. Not being able to move her husband and children there, she just had to pray for the opportunity to open up for her parents to move back to Branson.

In January 2016 that prayer finally became reality! RW and Donna moved back to Branson and reformed a group, created a show and opened up at Starlite theatre in March performing all the way thru December as a morning show. Andrea’s dream had once again been fulfilled.

During that 15 years of her parents being in Pigeon Forge, Andrea and Todd’s kids graduated (all but one yet), went to colleges, got married (3 weddings in one year), and November 2016 a granddaughter was born, and in December another granddaughter was born. RW and Donna were able to celebrate with all of us as they became great-grandparents.

Andrea not only performs with her family but helps with the business side as well and Todd is the business manager for the show. It’s definitely a family affair to make our dream work and we are so excited to be opening our show at The Dutton Family Theatre in 2017 season.

Todd and Andrea reside in Ozark, Mo, as the family grows, loving and living life as new grandparents. At last we are all together!

Here I am! I stand at the door and knock. If anyone hears my voice and opens the door, I will come in and eat with that person, and they with me.
Revelation 3:20
DailyVerses.net

Error: An access token is required to request this resource.
Type: OAuthException